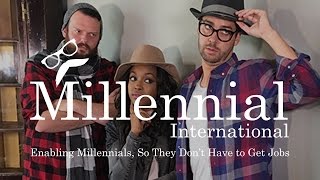 It's the year 2016 and the presidential election is upon the United States once again. To no one's surprise you can either vote republican or democrat. The two party system is still holding strong in America for producing the only sources of presidential nominees that have any chance of getting into the white house.

Around 1790 when the two party system started to arise, it was a way for the masses to find a group to share common interests and find a political figure that could represent the views of that group. While that still seems to be the case today, we have an ever increasing number in the american population who doesn't want to conform to every view on either side of the political spectrum. Many of those in that population are from this generation Y or the millennials.

In the 21st century, the two party system has been failing the american public for some time now and it's time we be intellectually honest and have open discussions about the options that lay before us and what is realistic or not while we work to either fit our current system to our new standards or reform the current system into something that can truly represent the public.

The issues and concerns of the world are no longer belief and or personal reason based, even if the media wants you to believe so or you believe so yourself. Instead many of these issues that face us need to be looked at by more than our personal beliefs. We need to use facts and observations to base our opinions in today's world, but many are still reluctant to change their beliefs and decamp from what they have thought about for years. The ability to decamp is an issue that many of the citizens of the U.S. struggle with and is leading us down a dangerous and risky path that us millennials will end up paying for in the years to come.

Why is that those in office, those that create the laws we must abide by, those that try to control and spy on our personal lives without permission are behind in the times on the issues that matter?

These are the questions that generation Y is asking and why we are pushing back against the system.

We currently have a government that still clashes over ideas like gay marriage, gender equality, racism, and climate change just to name a few where we are lagging far behind other countries in our response and action regarding these social issues. It appears to us millennials that the reason we have fallen behind these other nations is because those put in charge by our flawed voting system (which is another blog post in itself) don't actually represent what the majority of american citizens want, especially the millennials. They act as though they do, but it's the big money and lies they tell that march them into the oval office or senate chair, not their true stance on issues that then plague the country for years to come. Instead, once they get into office they have personal agendas that seem to take top priority over the needs and wants of those they were sworn to represent.What does any of this have to do with the two party system in which this blog post is about? Everything. Since when has it been acceptable to become stagnant in our ways? Don't we teach our youth that new ideas and thinking for yourself can get you much further in life and make yourself happier than following blindly those who came before you.

When someone who has a chance to make real changes, has a track record of honesty and integrity, but does not fit the norm of one of the two parties they are helpless as they try to get funding to have any chance of competing with the big boys. While this up and comer has more connection to those he wants to represent and usually takes the best from both sides of the political spectrum whilst leaving behind the morally and ethically unjust ideas with the party that wants them he or she therefore has little to no chance to get elected.

Only having two parties limits what our government can accomplish due to the limited number of views on the important issues. On one side we have a republican party that has shifted to the radical side on the right when it used to lean toward the middle of the political spectrum. This shift has pushed many of those who associate with the party to also get shifted in their views, which uses the bias of personal ideologies and theologies to bend their opinions on topics. This flaw, although pointed out to them by many, seems to elude the republican party or at least they are not caring to address the issue. At this point, we must ask ourselves why this viewpoint from the right causes a trifle with many millennials. First of all, the rise of secularism is faster than ever before and that alone causes many millennials to cringe at the fact that laws that govern us will be made from the foundation of a belief system that many of us to not hold. This does not just apply to the seculars, but also those who hold different beliefs than those holding office.When the failure to recognize one's differences is lost, we get a government that is only truly representing one group and not the vast number of ideas and beliefs that we consider to be one of reasons why America is so great. The democratic party falls apart when put under the same scrutiny. Although they seem more on top of the social issues of the american public, they fail when it comes to where the government's hands should be in our personal lives. It seems they have derailed from the reality of how much interference the government should have in our lives and this derailment makes the democratic party dangerous. Of course we want people to be happy and have the things they need to survive without struggling to make it day to day, but that shouldn't mean you get to do what you want just because you've been put into a position of power. They need to remember they have been put there by the people and for the people.

This brings us to the conclusion, that many from the millennial generation have derived, that a break up of the two party system is not only a good idea, but a necessity. A qualified third party can show the american public that choosing the lesser of two evils is possible and that not doing so actually puts america in more harm and continues to keep us behind the times, when we are so used to being the frontrunners of change and all good things in this world. I have no doubt that in my lifetime a successful revolution will occur as the younger generation and those who can decamp and change with the times decide enough is enough and make a decision to change the course of american politics forever.

If you have ever had the thought that voting outside the two party system is a waste, be honest with yourself. Make sure you can be proud that the person you wanted in office actually is a good, moral person and that they truly have your wants as their agenda. If not, voting for them was the true waste of a vote.